Comedy icons Steve Martin and Martin Short will bring their critically acclaimed tour “The Funniest Show in Town at the Moment”  to the UK and Ireland for the first time in 2020. This celebrated show redefines the form in unexpected and profound ways, from two of the funniest, most influential and much-loved talents of the past century.

The tour will kick off at The SSE Hydro in Glasgow on the 9th March 2020 with dates at the 3Arena in Dublin, The SSE Arena in Belfast, two nights at London’s Royal Albert Hall and shows at Manchester Arena and Resorts World Arena Birmingham.

Tickets go on sale at 10am on Friday 27th September in the UK via  My Ticket  and in Ireland via Ticket Master.

“The Funniest Show in Town at the Moment” follows Steve Martin and Martin Short’s sold-out tour “An Evening You Will Forget for the Rest of Your Life”. The show was filmed for a Netflix special that earned rave reviews and garnered four Emmy nominations. Fuelled by comedic precision and anchored in a lifelong friendship, Rolling Stone called the special “wryly hip but unexpectedly touching,” with the New York Times describing it “gleeful and satisfying.” 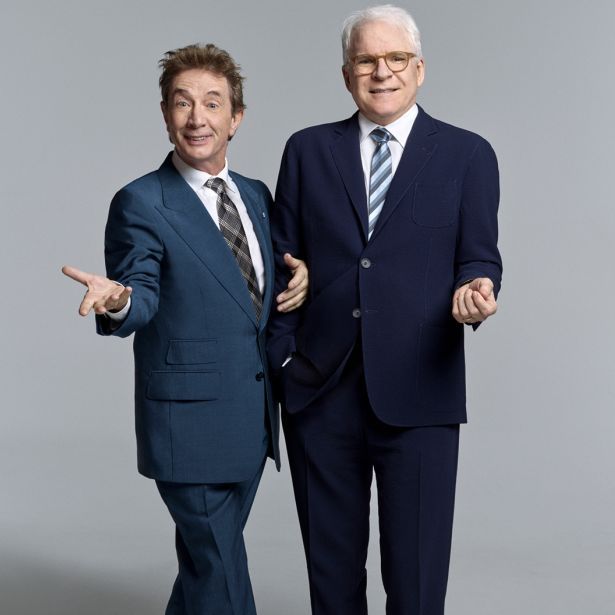 Steve Martin and Martin Short’s brand of humour is an often subversive but always joyous self-deprecating romp from two comedy masters driven to make each other laugh as much as the audience. The jokes come at you at a rapid-fire pace with big punch lines as they mock Hollywood and the fickle nature of celebrity, but the comedy truly soars when they lovingly (and relentlessly) roast each other.

Martin and Short’s chemistry and timing on stage reflects a friendship forged over three decades which developed when they met for the first time on the set of the 1986 film “Three Amigos”. These two titans of comedy have been touring together since 2016, when they launched their first live show entitled “A Very Stupid Conversation.”

Talking about bringing the tour to the UK and Ireland for the first time Steve Martin said, “The UK represents more to us than a long flight. It is the comedy motherland.”

Steve Martin is one of the most well-known talents in entertainment. His work has earned him an Academy Award, five Grammy awards and an Emmy. In the mid-seventies, Martin exploded onto the comedy scene. By 1978 he was the biggest draw in the history of stand-up and became the first arena-headlining comedian. His bestselling and highly-acclaimed memoir Born Standing Up: A Comic’s Life documents these years in stand-up and is candid, spectacularly amusing and beloved by many.

Martin began his career on The Smothers Brothers Comedy Hour (1967–1969), for which he earned his first Emmy Award for Outstanding Writing Achievement in Comedy, Variety or Music in 1969. In the mid-1970s, Martin shone as a stand-up on The Tonight Show Starring Johnny Carson and NBC’s Saturday Night Live. Martin’s films are widely popular successes and are the kind of movies that are viewed again and again: “The Jerk”, “Planes, Trains & Automobiles” , “Roxanne”, “Parenthood”, “The Man with Two Brains”, “Father of the Bride” and “Bowfinger”.

Martin Short, a celebrated comedian and actor, has won fans and accolades in television, film and theatre since his breakout season on “Saturday Night Live” over 30 years ago. His popularity and exposure on “SNL” led Short to cross over quickly into feature films. He made his debut in “Three Amigos “and followed with “Innerspace”, “Three Fugitives”, “Clifford”, “Pure Luck” and Tim Burton’s ”Mars Attacks”.   One of Short’s most memorable roles was in the remake of “Father of the Bride” as Franck the wedding planner, a role he reprised a few years later in Father of the Bride Part II. Short lent his voice to the animated film “Madagascar 3” and Tim Burton’s Oscar-nominated “Frankenweenie”.

Short won a Tony, Theatre World Award and an Outer Critics Circle Award for his role in the revival of “Little Me.” A two-time primetime Emmy winner and multi-nominated for both primetime and daytime Emmys, Short returned to television in 1998 for the miniseries “Merlin” and host of “The Martin Short Show.” Short’s New York Times bestselling memoir, “I Must Say: My Life as a Humble Comedy Legend”, was published in 2014. In 1994, Short was awarded the Order of Canada—the Canadian equivalent to British knighthood. He was also inducted into the Canadian Walk of Fame in June 2000. In 2017 he received a Lifetime Artistic Achievement Award from the Governor-general of Canada.

In 2018, Martin and Short’s Netflix special titled “An Evening You Will Forget For The Rest Of Your Life” received four Emmy nominations.

This side-splitting tour promises to be the hottest comedy ticket of the year.  Book now to avoid disappointment!
TOUR DATES